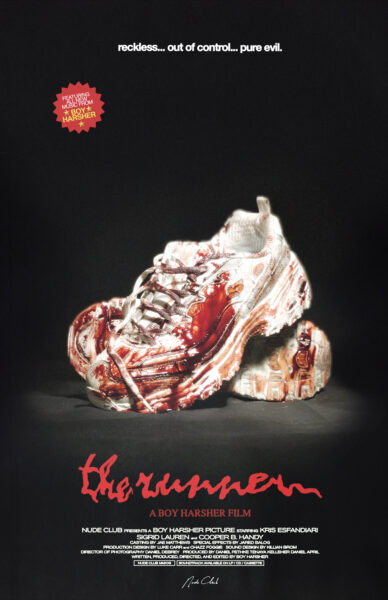 “With ‘Give Me a Reason,’ we wanted to write something that encapsulates that feeling of yearning — the way we feel when we catch eyes from across the room. Our music can be flirty and crushable, and it’s fun to play with that,” explains Matthews. Over a steely beat, Matthews intones, “Speak of the devil // and she will appear // afraid of the runner // who draws herself near.” Boy Harsher continues teasing the cinematic universe of The Runner, the short horror film written, produced, and directed by the duo which will be released in January 2022.

Listen to Boy Harsher’s “Give Me a Reason”

Boy Harsher’s fifth release is not a traditional album ⁠— it’s a soundtrack that balances eerie instrumentals with pop songs that push the boundaries of the duo’s sound. In the midst of last year’s chaos and Matthews’ MS diagnosis, Muller started working on moody, cinematic sketches. In Matthews’ period of convalescence, it was uncertain what these pieces would become other than catharsis, but she kept thinking about a sinister character: a woman running through the woods. The duo developed this idea further into The Runner, a film that explores lust, compulsion, and the horrific tendencies of seduction. The movie is intercut with a meta-style “documentary” about Boy Harsher’s recording process. The project is a reconciliation of uncertain times made into sound and moving images. The Runner and its soundtrack are both a return to form and an evolution for the duo.