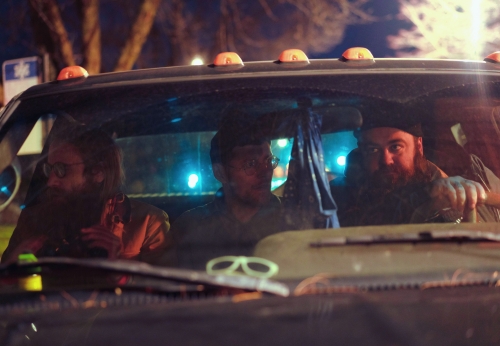 From beyond the Spire and the Ward of Song echoes Cloakroom’s tertiary LP, Dissolution Wave.

With lyrics based on an imagined cosmology, Dissolution Wave marks a grand expansion of Cloakroom’s dreamy space-rock palette. “We often get lumped in with stoner rock bands—and I love that,” bassist Bobby Markos offers, “but at the same time, we can do an acoustic set. If we wanted to make a song completely out of synthesizers, we could. So our approach to Dissolution Wave was to do everything we’ve ever wanted to do.”

You’ll hear it in the album’s first single, “A Force At Play.” Written from the perspective of the album’s protagonist—an asteroid miner who writes songs by night—the track has an airy pastoral feel, almost like a modern equivalent of the Byrds’ gorgeous 1968 departure album, Sweetheart of the Rodeo.