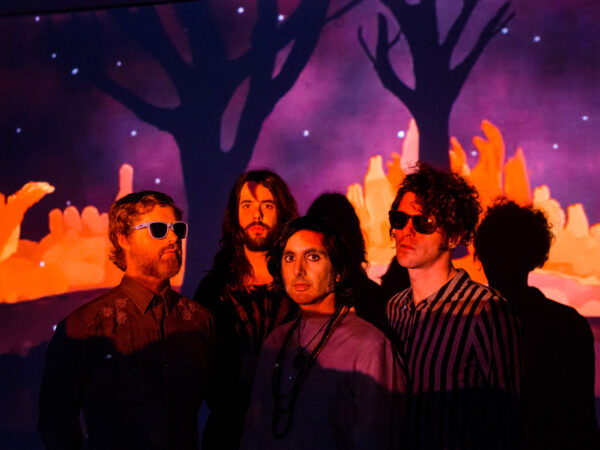 Rishi Dhir writes what he knows. In Elephant Stone, the modern psych-pop band he has helmed for the past 13 years, Dhir has woven stories of loss and grief, existential crisis and rebirth, and a world withering away all set to elegant, intense droning music. What Dhir knows—and something so many of us can relate to over the past two years—is presented with such clarity on Elephant Stone’s latest, Le Voyage de M. Lonely dans la Lune.

The EP, set for release on February 18, 2022, is sung entirely in French, a departure for the English-speaking band. The record is what Dhir calls a “love letter to Montreal, Quebec, and all of our French-speaking fans around the world.” While Dhir, a first generation Indian immigrant with very strong cultural ties to the motherland, was born and raised in Montreal, he’s always had a strong connection with French-speaking friends and fans.

Lonely is, as Dhir explains, thematically connected to the band’s last record, Hollow. On Hollow, a conceptual record that features a vocal appearance from Dhir’s daughter, Elephant Stone confronts the questions around a dying earth and how humanity can survive that. Recently, Dhir told CJLO that Hollow featured clear narratives, with side A focusing on the storyline of actual destruction and side B heavily leaning into how people in the story could live through such a moment. M. Lonely picks up the personal aspects of survival, and what that means with or without people.

“I built this story line about a hermit named M. Lonely who is very content in his solitary world until a world event happens that causes everyone else to stay home as well… sound familiar?” Dhir says. “He sees this as a mockery of him and his choices, deciding instead to build a rocket ship to the moon to be left alone,” Dhir explains. Unravelling over the course of four songs with raucous hooks and voltaic synths on first two tracks, and lonely, soft melodies on the last two, M. Lonely, Dhir says, “ultimately realizes he was happier back on imperfect earth with all of its imperfect people.”