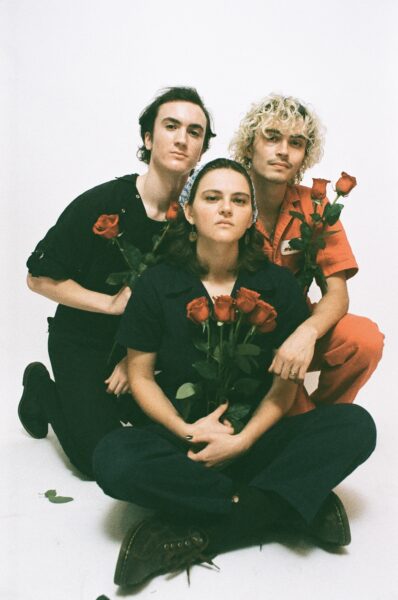 Fans know Friko (Bailey Minzenberger, Luke Stamos, and frontman Niko Kapetan) as vital rising stars in the Chicago scene. The music, which freelancer Britt Julious described as “perfect slices of indie-pop” in the Chicago Tribune last January, is complex, layered, and dynamic. Over the band’s time together, it has become clear they are comfortable embracing multiple musical extremes at once. Take a listen to the explosive and hypnotic beat of “In_Out” off their self managed 2022 EP release, Whenever Forever, and juxtapose it against the serene, strings soaked tracks that follow, “Half as Far” and “Can I See U Again.” It becomes even more pronounced in live performance, where a frenzied floor, grinding with wailing guitars and animation, in the very next minutes finds itself collectively holding its breath silently as the band eases them into a spell. Lyrically, Kapetan explores the possibility and risks of a life given over to music, interrogating what a life well-lived means to him. The duality rings out in the compositions, evoking rock and folk icons such as Leonard Cohen and Nick Drake. As Friko plays out sweeping melodies, held up by thrashing guitar and punchy beats, it feels as if Kapetan sings to you. Crooning about stories you know, memories you had but have somehow forgotten.