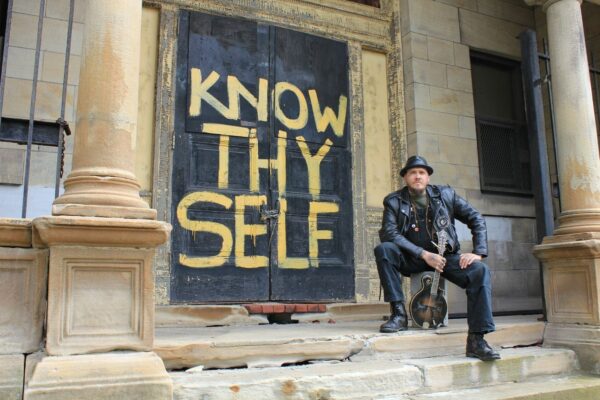 A native of Milwaukee, WI, Orvis has been setting and raising the bar for punks-turned-pickers ever since his days in .357 String Band -of which he is a founding and former member. Known for his lightning-quick mandolin picking, he effortlessly infuses punk, rock, blues, gypsy, honky-tonk, bluegrass, and old-time to develop a style all his own helping to define the sound of a genre while simultaneously, and gratifyingly, making it all that much more difficult to pin a name onto.
After leaving Milwaukee in 2007 he relocated to Pittsburgh, PA where he now calls home, that is when he’s not touring nearly full-time as a mandolin and banjo player with The Goddamn Gallows, or for his own project Jayke Orvis & The Broken Band. As singer, instrumentalist, composer, and bandleader, Orvis relies on an impressive live lineup assembled for The Broken Band

Jayke Orvis’s debut offering, It’s All Been Said, was released in 2010 on Farmageddon Records. The ten-song album, recorded by J.B. Beverly at his Richmond-based Rebel Roots Studio, highlights a more personal side of Orvis’s songwriting, masterfully running the gamut from dusty countrified ballads to infectious, flat picked throw-downs between he and the other artists gathered for the recording, including J.B. Beverly, Johnny Lawless, Dan Mazer, James Hunnicutt, Avery (of The Goddamn Gallows), and cigar box guitar whiz Geo Ballentine.
It’s All Been Said continues drawing more and more attention to Orvis who has recently received airplay on Sirius, earned an official endorsement from Weber Mandolins, and celebrates an Artist of the Year 2010 nod from Saving Country Music.