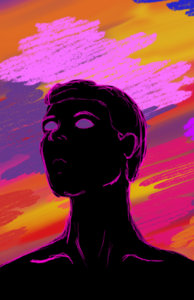 Kyle John Kenowski is a Milwaukee based musician and animator whose music is best described as “classical psychedelic folk pop”. His music ranges from triumphant to devastating, from scary to sweet, decorated with lilting classical guitar passages and a thousand different voices. In November 2020 he released the animated music video TRUSTWORMY which was published by Adult Swim alongside his album NEED DISEASE.