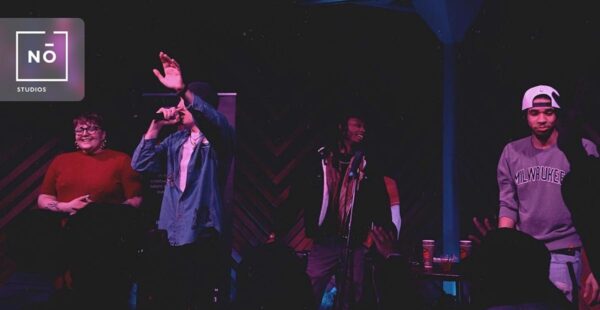 Spider Creek is a music collective based out of Milwaukee Wisconsin consisting of roughly 30 artists ranging from musicians and producers to visual artists. Sonically, the group enjoys the term “Genre Fluid” to describe the sound created in their studio, titled “THE ATTIC”. (As it resides in the attic of the home 3 of the 4 original members live in.) The collective’s inception took place in March of 2020. In an attempt to escape the insanity of the early stages of the pandemic the 4 original members, SAINTRÈ, Ian James, Makatà and Lizzie Kay rented a house in northern Wisconsin on a body of water called “Spider Creek”, with the intent of writing a collaboration album. At the end of the week they had finished the project and went their separate ways as artists. Over the course of the next year and a half they continued to have Spider Creek recording sessions while maintaining their solo artist status. It wasn’t until January of 2022 that the 4 decided to focus on creating a collective. Since that time the group has invited new artists to each session adding to the complexity and eclectic nature that Spider Creek embodies. Attempting to make each lock in recording session a new and exciting experience for the artists involved. Hoping to allow them to meet and work with artists they have not in the past as well as create an environment that feels professional while still having the aura of a comfortable home. As a team, Spider Creek has released 2, 9 track albums, 3 singles and a 3 track EP since the beginning of 2022.