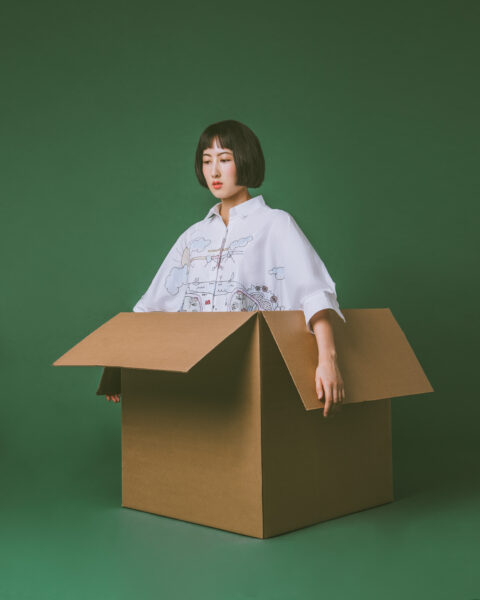 Broadcasting from a 10′ x 10′ box room in Seoul, Korea, Su Lee writes, produces, designs and directs all her music and content. Her box room is where she eats, sleeps, and creates, and Su uses every surface to build the world that exists in her imagination, far beyond the confines of her surroundings.

Su first crashed onto the scene with her song and video for “I’ll Just Dance.” The video, subtitled “What My Mental Breakdown Sounds Like,” shot to 30,000 upvotes on Reddit and 750,000 views on YouTube in the first month, resonating with an audience who had been stuck inside for several months during the Covid-19 pandemic. Both the song and video were 100% created by Su and showcase her quirky and honest style.

The buzz from “I’ll Just Dance” quickly translated to a flurry of industry interest with labels and companies drawn to Su’s raw expression, a counterpoint to the traditional hyper-polished pop star. This commitment to authenticity has continued to steadily attract fans, and in addition to releasing music she hosts her “Overthinkers Society” podcast and live streams on Twitch.

In August 2021 Su released her self-produced “Box Room Dreams” EP which traces a year of isolation and creation from her tiny room. “Having had my career as a musician launch almost simultaneously with the pandemic, this EP is kind of like my quarantine journal as a baby musician,” Su shares about the record. “It’s mostly a jumble of my heightened sense of loneliness, uncertainty, and anxiety. But I also wanted to add a hint of some magical daydreams and high hopes for the times ahead.” Certainly those high hopes aren’t unfounded with The Guardian saying “If we could boil Gen Z internet, with all its anxieties and goofiness and creativity and openness, down into a person, the result would be Su Lee.” Su has drawn further praise from Billboard, NYLON, Elle, and Teen Vogue and is poised to break out well past the walls of her room.