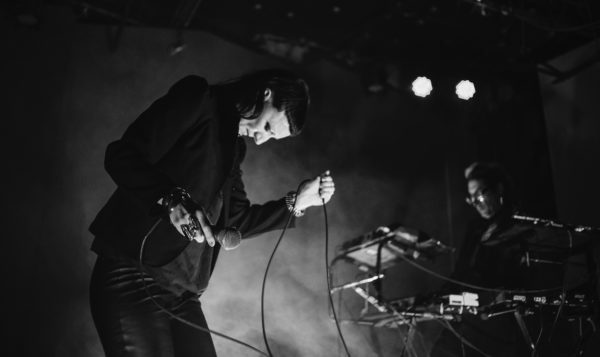 The album began as 23 demos written and recorded in a remote cabin in the woods of Northern Michigan during the dead of winter. In total isolation, and with a reduced amount of gear (a modified version of their live setup) on the cabin’s kitchen table, the duo were completely immersed in an incessant inescapable studio of their own making – looping, repetitive analogue sequences grinding away day and night. At the end of the intense demo session, a handful of peers were enlisted by the band for the difficult task of paring down the demos into the final album.

The result is 10 tracks of uncompromising dark electronics, showcasing ADULT.’s return to aggressive and energetic dancefloor mastery. Album opener "This Behavior" alongside the follow-up "Violent Shakes" (which ascends into synths wailing like warning sirens over Kuperus’s commanding vocals) set the stage for an on-edge listen, while the heartbreaking "Silent Exchange" unfolds as a beautiful sad synth dirge. "Perversions of Humankind" breaks the mood – driving the listener into a slow and low groove before the frantic album midpoint of "Irregular Pleasure." "Does The Body Know?" is the album’s post-punk anthem, with irresistible singalong "we’re out of order –we’re undefined!" The latter half of the album drives forward with "On The Edge (You Put Me...)" and "Lick Out The Content," refusing rest and demanding movement and response. "Everything & Nothing" emerges slowly from sparkling synth textures, snowballing with nervous energy into an acid techno stomper before the album comes to a close on the icy landscape of "In All The Debris," a goose-bump inducing slow electronic mantra that closes the curtain on a massive album. Dais Records is proud to present ADULT.’s THIS BEHAVIOR. Available on digital, digipack CD, and vinyl LP in stores 9/7, with exclusive limited vinyl colorways for UK & Europe.

Artist statement on the album’s writing process: "It's confounding how often we negate the importance of disconnecting, getting weird, getting lost. Discomfort and joy intertwined. Day to day, theatrical self-presentation set to rest in our frantic social world. Public becomes private, almost too private. Looking out into frozen woods as you deliver your vocals. For who? For what? Taking walks along icy shorelines as you try to overcome writer’s block, as you try to overcome yourself. Not seeing anyone for days and weeks on end. Overwhelming thoughts and feelings come rushing in; anxiety, fear, purpose, banality, futility of task, power structures, power struggles, pointlessness, collapse. You’re faced to face yourself. Your awareness is heightened. You are neither here nor there. You are in a liminal state. As you work in this isolated cabin your windows become mirrors." 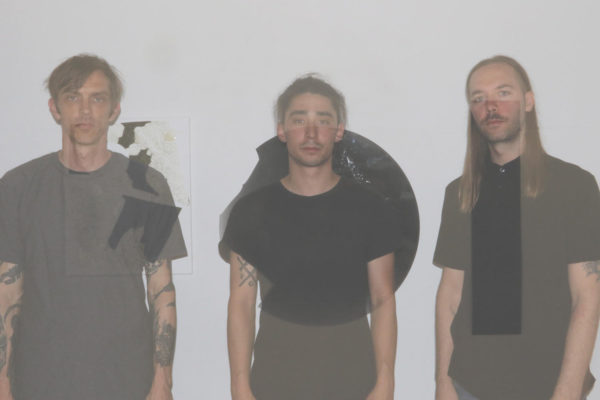 The trio consists of Detroit's Paul Bancell (vocals/guitars), Ben Saginaw (bass) and Chris Samuels (Synths, Samples, Drum Machines). They collect samples of the physical world and feed them with guitar, vox, bass, synth and drum machines to create an aura of darkness over a pop sensibility. Paul Bancell provides lyrics that Poe or Lovecraft would approve of while Chris Samuels and Ben Saginaw sculpt sounds that bring his macabre tales lurching into the world of the living.

The band’s "Their Body" EP follows up their third album, "Into The Water", released a little over a year ago on Felte. Ritual Howls’ production sees the band dipping their toes into cleaner sonic territory than previously heard. Lead single “This Is Transcendence,” may be their most “pop” song to date. And lyrically, it’s lyrics are as straightforward as we’ve heard from Paul Bancell too. “Perfume” could have the most terrifying opening synth line that will sear your ears instantly. “Blood Red Moon” is reminiscent of signature Ritual Howls with Bancell’s guitar leading while drum machine rhythms keep the industrial feel intact and Saginaw’s low end thickens the intensity throughout. 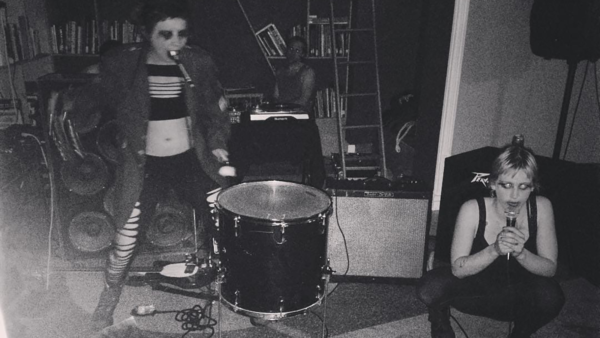 HOGG first began performing in Chicago during 2014. Working as a duo, they played raw and minimalist pieces using crudely-strummed guitar, scrap metal, floor tom, and drum machine. While their music takes influence from early industrial, no wave, noise, and punk music, they have devised a sound and style that is uniquely their own. Their music is built around a spare foundation of heavy electronic pulses punctured by occasional stabs of distorted guitar, floor tom, and biological samples. Their live performances are a pleasurable and ritualized exploration of alternate states of being within a brutal psychological atmosphere.