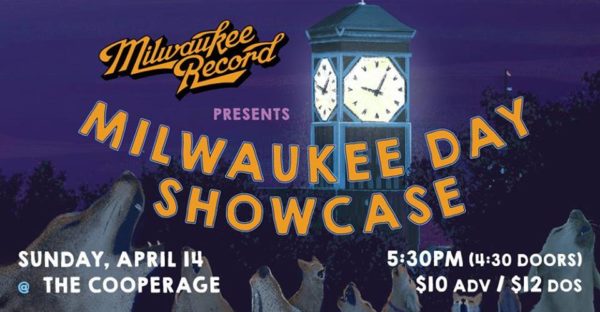 Join Milwaukee Record at The Cooperage on Sunday, April 14 to celebrate Milwaukee Day with an eclectic lineup of local entertainers. We’ve done our part by assembling an all-star cast of some of the city’s finest musicians.

Performers include Platinum Boys, Klassik, Joseph Huber, Lauryl Sulfate and her Ladies of Leisure, and host/poet Kavon Cortez Jones. On top of the music and poetry, we’ll also have yard games on The Cooperage’s patio for your enjoyment. The show will also host booths from a number of local non-profit organizations.

The 21+ show—sponsored by Miller High Life, Pedal Tavern, Nail Bar Milwaukee, and Cactus Club—starts at 5:30 p.m. (doors at 4:30 p.m.). Tickets are $10 in advance ($12 doors). There are so many great ways to celebrate Milwaukee on April 14, but we’re pretty excited about this one. We hope to see you there!

The PLATINUM BOYS, who hail from Milwaukee, Wisconsin, USA, are an interesting band. The initial impression one gets from the PLATINUM BOYS is that they cannot possibly be completely serious about this whole, you know, rocking thing – that they must be some kind of stoned in-joke, taken to the unfortunate extreme of actually appearing in public, likely for purposes of self-amusement and/or winning a bet. This initial impression is dispelled in brutishly short fashion once the band starts playing; uncorked, the PLATINUM BOYS deliver a musical wallop that will almost immediately require you to rethink your first impression, your life, and your not having a fresh beer in your hand – though likely not in that order. Against all odds, this unlikely marriage of Thin Lizzy to the Buzzcocks to huffing paint in an unventilated garage manages to collectively summon forth the spirits of the past 50 years of Rock, as seen through the uniquely 21st Century American lens – and, when the dust clears, you still might not be sure if the whole brilliant, mad setup is a joke or not, and if the joke's on you or someone else. Put more succinctly, The Platinum Boys are likely the only purveyors of musical genius that give the listener cause to suspect their IQ has dropped precipitously as a result of exposure to said genius. Are they genius wrapped in a layer of dumbness? Dumbness wrapped in genius? All genius, all the time? As I said before: The PLATINUM BOYS are an interesting band. (Rev.Norb)