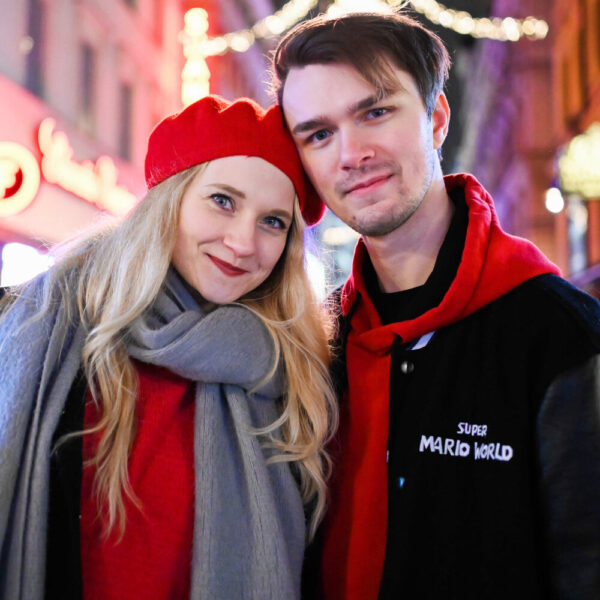 (Milwaukee)
Genre: Indie Rock
“The husband-and-wife duo of Amelie Eiding and Jon Kresin is the core of 7000apart. Their story began in 2012 when Amelie left her hometown of Stockholm, Sweden to attend high school as an exchange student in Green Bay, Wisconsin. It was there where she met Jon and they fell in love. When she returned to Sweden, the couple started 7000apart as their creative project together named after the 7,000-kilometer distance between them. They spent three years like this before reuniting and getting married in 2016, which is when 7000apart became a serious artistic endeavor.

7000apart’s music transcends the relationship between Jon & Amelie. One of the cornerstones of their songwriting is mental health awareness. Their lyrics often touch on personal struggles and finding strength through dark times. They want to create music that resonates with others & helps them to feel a little less alone.

7000apart released their debut record “We Are More” in 2019, which now has over 130,000 streams (and counting) and is featured on over 1,300 playlists on Spotify alone. 2020 also brought Amelie & Jon to the international stage on Sweden’s Got Talent (Talang) with their original song “Until I Found You”, brought them international press with a collaboration in Sweden with mental health non-profit Suicide Zero and their song “Hör av dig (Reach Out)” to spread awareness about loneliness people face during the holidays, and garnered them a WAMI (Wisconsin Area Music Industry) nomination for New Artist of the Year. 2021 brought more accolades for the duo with their song “Blank Check” being played on U.S.A. national TV on MTV’s show “The Hills: New Beginnings”.

Amelie & Jon’s sonic journey with 7000apart has brought them from being an acoustic singer-songwriter based duo to a formidable full-band indie-pop sound. The sound of 7000apart is a fusion from many different genres from funk to neo-soul, from mainstream pop to electronic music, and from rock to metal. Their sound has been influenced by long term influences of Paramore, Evanescence, Switchfoot, Sara Bareilles, and Adele; to the all time greats, such as: Amy Winehouse, Whitney Houston, and Abba; to more modern influences, such as: Dua Lipa, Ed Sheeran, and The Chain Smokers. They say that music is a window to the soul & 7000apart hopes that the lyrical content of their songs & fusion of their favorite genres of music will speak to their listeners the same way the music they’ve been influenced by has spoken to them.

The couple is currently working with Grammy-winning Nashville producer & songwriter, FEMKE, on their sophomore album, “Feel Your Feelings”. The project is a dynamic journey of the highs & lows they have faced on their journey, remembering the importance of self-care & expressing yourself while also remembering it’s okay to not be okay. “Feel Your Feelings” has a Side A which is more focused on the sad emotions we face in everyday life while Side B is focused on expressing yourself & self-empowerment.”