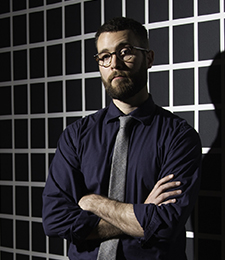 Ben Balcom is a filmmaker, educator, and independent programmer. His films have been exhibited at venues and festivals such as the European Media Festival, Media City Film Festival, Anti-Matter Media Arts, Alchemy Film, Ann Arbor Film Festival and Slamdance. Combining elements of documentary, fictional narrative, and abstraction, Balcom’s cinematic vocabulary is multi-faceted. He has explored melodrama, metaphysics, and, most recently, the politics of landscape. He is also the co-founder and co-programmer of Microlights Cinema. Since 2013, Microlights has hosted over 50 film and video artists from around the world.