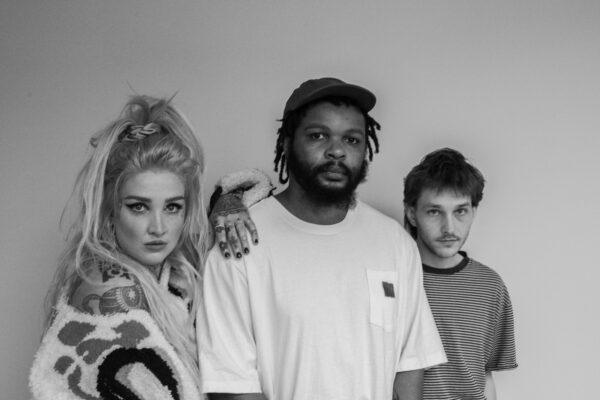 “I want nothing more than to be alone,” Emily Kempf sings early in Flower of Devotion, the third album by Chicago trio Dehd. It’s a startling admission coming from a songwriter who, just a year ago on Dehd’s critically acclaimed Water, wrote eloquently about the joys and pains — more than anything, the necessity — of love, compassion, and companionship. But then, “admission” isn’t really the right word here, given the stridency of Kempf’s tone. “Loner” is a declaration.

Not only for Kempf, who, when she wasn’t on the road with Dehd, spent much of the last year or so “totally alone, out of the game, just focused on myself,” as she puts it. It’s also a showcase for guitarist Jason Balla and drummer Eric McGrady, for the way the three of them play together, and for the seemingly impossible strides Dehd has made as a group in the short time since Water’s release. “We wanted to take a step up,” Kempf says. “We wanted to level up enough to where we feel powerful, but still in the same ballpark.”

Level up they did. In seemingly every way imaginable, Flower of Devotion is a major step forward — and a major statement, period — for Dehd. The songs show off a deeper range, from “Loner”’s synth-powered heartland rock to the empowered strut of opener “Desire” to the from-the-gutters howl of closer “Flying.” The performances are sharper, shot through with emotional clarity. The production, courtesy of Balla, shades everything in rich sunset tones. Flower of Devotion seems drawn from a well of confidence much deeper than the one they’d tapped on Water.

That’s not a coincidence. The trio went into the album’s writing and recording with clear minds, ready to take what they’d learned the last time around and refine it further. “We’re learning by the process of doing and doing and doing,” says Balla. “The last record, the vibe was ‘How minimal can it be? What’s the minimum that a song requires to succeed?’ This one was like, ‘How can we make this thing that’s really powerful?’” “We didn’t become more perfectionist,” Kempf clarifies. “We’ve always been really scrappy, but we decided to polish our scrappiness just a little bit.”

That polish brings out the shining and melancholy undertones in Balla and Kempf’s songwriting, even as it captures them at their most strident. His guitar lines at times flirt with ticklish cosmic country, while at others they reflect the dark marble sounds of Broadcast. Kempf, meanwhile, establishes herself as a singer of incredible expressive range, pinching into a high lonesome wail, letting loose a chirping “ooh!,” pushing her voice below its breaking point and letting it swing down there. When she and Balla bounce descending counter-melodies off one another over McGrady’s one-two thumps, or skitter off over a programmed drum pad, they sound like The B-52s shaking off heartache.

While they were writing the album, Kempf says, “we both went through hell, literally, and the world seems to be going through hell, too.” Balla experienced profound loss and all that comes with it: For him, the album is about “all the fixes you try to put on your problems,” he says, “struggling with bad impulses.” Kempf, for her part, cultivated the sense of self-sufficiency she craved, which forced her to confront her own need for attachment. “I’m obsessed with being with people, or I’ll have my identity attached to a partnership, whether it’s romantic or in the band,” she says. “How can I be utterly alone and chill?”

But what makes Flower of Devotion so impressive is how its creation seems to have strengthened its creators, both as individuals and as unit, even as they’ve stared down their own limitations. It’s also striking just how much fun they seem to be having in the process. “It’s okay to be lighthearted in the face of despair,” Kempf says. It’s a theme that runs through the album, from the opening back-and-forth build of “Desire” to the click-clacking chorus of “Haha,” which finds them deflating their own history.

At every turn of Flower of Devotion, sadness is countered by joy, joy is tempered by sadness. “Being alone and grieving is very isolating,” Kempf says, “but then you come out of your little cave of grief, and your friends and family and partner are all there to pat you on the back and hold you until you have to go back into the cave of grief alone.”

Flower of Devotion was recorded in April and August of 2019 in Chicago. It will be released on Fire Talk Records on May 22, 2020.