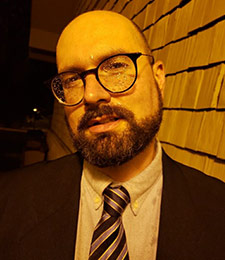 Drew Durepos is a filmmaker living in Chicago. His short films investigate narrative structures through experimental modes and often involve loved ones, appropriated sources and inane visual effects. His experiences in commercial production, spanning micro-budget features to studio films and network television shows, inform his approach and haunt his dreams. His work has screened at London Short Film Festival, Athens International Film & Video Festival, Drunken Film Fest Oakland, Tacoma Film Festival, and Onion City Experimental Film + Video Film Festival. He received his MFA from the Department of Film, Video, Animation and New Genres at the University of Wisconsin–Milwaukee in 2018. He is a member of the programming collective at Nightingale Cinema in Chicago. He teaches at UW–Milwaukee and Loyola University Chicago.