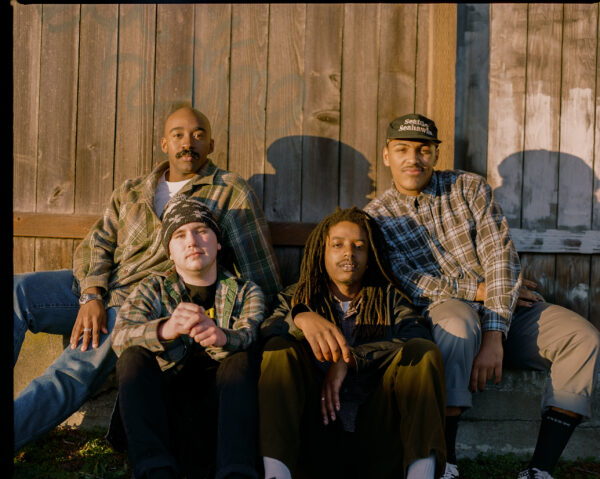 By his early twenties, life and music had already chewed Aramis Johnson up.

“I started pursuing music in 2013. All my time and energy was spent trying to be a part of the rap world. I started making beats for friends, started groups, and things would fall apart.”

When he saw King Krule on the cover of The FADER and encountered The Perks of Being a Wallflower, he discovered a love of not just the rap and R&B he’d grown up with, but loud guitars – and soon bought his own.

After high school he was introduced by a mutual friend to Ladaniel Gipson, and they soon bonded over their shared love of indie rock. Ladaniel had spent most of his time in high school honing his skills and focusing on becoming a better musician.

After a night of karaoke, they agreed to start a band with their friend Nathan Cornell, who had been playing in emo and DIY projects since his teens, and realized just how much work they had to do the next morning: Aramis had never sung or played guitar in a band before, and Ladaniel decided to become their drummer when they couldn’t find one. The four members make up the project, now called Enumclaw.

The songs that make up their debut, Jimbo Demo are the sound of three friends channelling their love of Nirvana, ‘90s R&B, and Drake into a collection of songs addressing childhood trauma and where one fits in the world – especially when a space doesn’t feel meant for you.

Second single “Free Drop Billy” is about wanting to see what you set out to do all the way through – no matter what. “Where I grew up, a lot of people are townies, or losers. I sometimes have survivor’s guilt about it. I went to college, and I’ve done some stuff that a lot of people I know in my life haven’t. It’s about not wanting to fall back into the traps of things like that, about not wanting to end up like some of my friends. I don’t want to get stuck.”

As the sessions for Jimbo Demo came to a close, the trio asked Aramis’s younger brother Eli Edwards to join as their bassist, a last ditch effort to keep him on the straight and narrow. He agreed before he had played a single note on a bass, and his energy transformed their sound and energy.

Jimbo Demo is the sound of four people announcing themselves as they create the reality they want to see – and the first step on their journey to be the biggest band in the world.