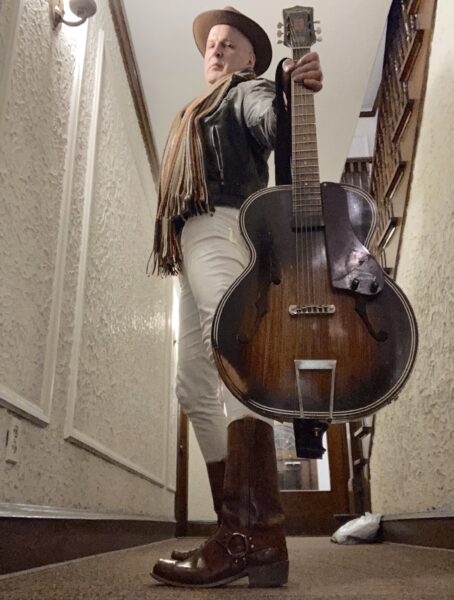 “You could search the states of Wisconsin and Minnesota and not find a musician as talented as Milwaukee’s Eric Blowtorch.”             -David A. Kulczyk, Maximum Ink

The latest Eric Blowtorch album is the triple vinyl LP Quality Items, recorded with the Inflammables.  “Everybody has a gimmick,” Blowtorch claims.  “Mine’s content” – emotional, communal, and political content delivered with intense guitar playing and singing.

Eric Blowtorch is an ambitious artist; some say lunatic.  In the Duff Guide to Ska, Steve Shafer wrote, of Quality Items, “There’s some really fantastic ska and reggae here, but also a few mix tapes’ worth of top-shelf jazz (big band/free form/no wave), soul, bossa nova, pop and rock, even disco (the musically omnivorous Joe Strummer would’ve been proud)….  Like Sandinista!, the longer you live with it, the more you discover, and deeper you find your love for it.”

Nationally, E. B. has recorded with three original Fishbone soldiers: Norwood Fisher, Angelo Moore and Chris Dowd, resulting in the 2022 7” single “Too Many Dues.”