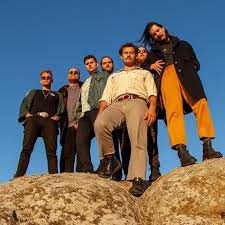 Evolfo’s homegrown musical universe is forever expanding. If the Brooklyn-based psych-rockers felt pressured to repeat the successes of their 2017 album Last of the Acid Cowboys they certainly didn’t show it. One might think a band that racked up 6 million-plus streams on their debut record would try to recreate this by doing more of the same. But when the 7 members of Evolfo piled into the tiny, sweltering, attic-turned-recording studio of band leader Matt Gibbs’ Ditmas Park home, they intended to step confidently forward into fresh sounds and more vivid conceptual subject matter. They have flipped the world of the Acid Cowboy on its head, departing the earth-bound adventures in melting landscapes, rat cities, and desert sojourns for metaphysical territory and the mountains of the mind. “We’re always going to be in a state of flux,” says Gibbs, who formed the group a decade ago, “I consider this to be an exciting, positive thing. We have to embrace our own change.” On their brand new album Site Out of Mind, Evolfo reaches far beyond the confines of genre to create a colorful echo-drenched psych-rock dream all their own. Adorned with a mind-bending cover by visual artist Robert Beatty, the result is a collection of songs that are unexpected, absorbing, and blissfully tripped out. As a seven-piece band, Evolfo has grown into a naturally collaborative songwriting process. Each member fills a role: Gibbs on guitar and vocals, Rafferty Swink on keys and vocals, Ben Adams on guitar, Kai Sorensen singing harmonies and playing trumpet, Jared Yee on saxophones, Ronnie Lanzilotta on bass, and Dave Palazola on drums. All share in the writing credits on Site Out of Mind and are not overly territorial with their instruments. Adams, a guitar player, also laid down some trombone parts where called for, and while guitars are handled primarily by Gibbs and Adams, Swink and Sorensen are frequently heard playing guitars live and on the album. Evolfo can easily shuffle roles and arrangements on stage with a relaxed refinement that calls to mind Wand or early Tame Impala. Swink also took on the role of producer for Site Out of Mind. After performing his own parts, he would swap hats, mixing each person’s part and overseeing the broader scope of things. “The rest of the group put an enormous amount of trust in me when it came to guiding what became this album,” he says, humbly. “I wanted to make a record more cohesive, lush, and cinematic in scope. Recording Site Out of Mind felt so good because, for the first time, we were free.” In that, Site Out of Mind is the best of both worlds: thoughtful planning and joyful improvisation. Because the record is comprised of one-take recordings, an organ-heavy song like “Orion’s Belt” feels like you’ve walked into a mind-exploding jam session where everyone’s so in tune that they don’t even need to make eye contact, or a rhythm-driven cut like “Strange Lights” which jolts with an on the fly energy akin to Can. Evolfo doesn’t just channel ‘60s psychedelia on Site Out of Mind; they warp the genre with experimental flair, from saxophone electronics to droning violinists. Partially inspired by concepts pulled from sci-fiction and one group psychedelic drug trip, Site Out of Mind is a thrilling spiral into the depths of the spiritual mind and the afterlife. Lyrically, Gibbs says, it could be interpreted as a continuation of the loose concept that Evolfo’s previous album hinted at. “If the protagonist of that album died at the end of Last of the Acid Cowboys,” says Gibbs, “then this was the protagonist’s internal journey, flipping the landscape, and going through the mountain of their mind in that moment of mortality; perhaps a blurring of brain activity between dying and death, between life and the afterlife.” During late-night overdub sessions, Gibbs, Swink, and Adams would tweak lyrics line by line until it resulted in poetic verses like those of “In Time” and “White Foam”. “We got into far-out conversations and we would collaborate to turn them into the most stimulating and effective lyrics,” recalls Gibbs. “Some songs turned dark, creepy, and sad, but we embraced it all and you can tell it’s working to draw out the energy we’re channeling.” Site Out of Mind was recorded on the top floor of his Ditmas Park home where, years before Gibbs moved in, a real-life exorcism was held. His roommates have heard things moving, the previous tenant witnessed items falling, and everyone can see the cross made from ashes above the doorway. “Funnily enough, it was one of the things that made this the greatest recording experience of my life,” says Gibbs. “The lingering spirit could be considered the eighth member of the band.” He’s not joking either. While recording, Evolfo’s amps would break, creepy feedback would kick in, and inexplicable shifts in levels would occur — all of which can be heard on the album if you listen closely. By far what sets Site Out of Mind above the rest of today’s psych-rock records, though, is Swink’s intuitive ear for crisp, warm production. He presents high-energy hooks without neglecting any instrument in the music’s overall mix, a decision that recalls the early albums of Yes or the lush revivalism of Quilt. Collaboration is at the core of Evolfo’s creativity, yes, but it’s the subtle overdubs and sleek mixing Swink added that make their new music so rewarding. “The attic is a very small space for all of us to stand in, let alone play instruments and record basics, but I think that was a benefit because our communication was hypersensitive,” says Swink. “We were all set up in a half circle around our drummer Dave with one guitar amp isolated in a crawl space, another in Matt’s bedroom, and a third in his bathroom. By recording this album in Matt’s attic and mixing it in my home studio, we’ve woven together sounds that already have a very special and unique sonic fingerprint. These sounds are ours.”