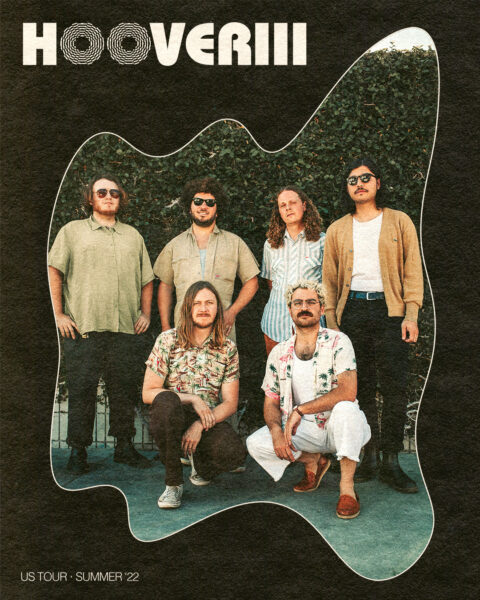 Los Angeles psych-rock band Hooveriii (pronounced “Hoover Three”) have announced the July 29 release of their new album A Round of Applause.

Today the band shares the first take of the album by way of A Round Of Appluase’s opening track, “See.” The band’s Bert Hoover notes, “‘See’ is about trying not to take life for granted. Some things are easier said than done. It’s our first song to feature Anna Wallace singing along with us and it came together rather seamlessly. It was a pretty bare bones jangle jam until the band filled it with ear candy.” The video was filmed on 16mm at the Trona Pinnacles in Trona CA. Conceived and co-directed by the mighty Nikki Houston and Owen Summers it features aliens stranded on earth try to find their way home until things go very wrong.

Hooverii have confirmed their first U.S. tour in support of A Round of Applause. The dates kick off July 23 in Oceanside, CA and conclude in Phoenix, CA on August 27.

Prior to delving into A Round of Applause — Hoveriii’s second album through The Reverberation Appreciation Society —the band had stuck to a routine of issuing about two releases a year (including singles, live albums, etc.). After the rise of a certain five-letter word that starts with a C, they realized that time really shouldn’t be taken for granted. Finding additional inspiration via Nick Cave, who once said that dabbling with new ideas continues to fuel his near-50-year career, the band decidedly took a different approach with their new album and gave themselves the freedom to explore in the studio.

The end result is A Round of Applause, an expansive and even, at times, experimental record. Whereas 2021’s Water for the Frogs was akin to a jam-band record — most of its seven songs are about five minutes long (including a closing track that lasts nearly 10) — A Round of Applause could be considered their “pop” album. Occasionally paying homage to the Canterbury scene, the band consider it to be a palette cleanser of sorts. “I am not really a playlist guy or a singles guy,” Hoover admits. “I’m really into the album experience. … So yeah, we made a pop record. But also, to me, this record is very progressive as well, and I think that that provides a nice balance.” HE previously referred to Water for the Frogs as the band’s equivalent of Iggy Pop’s The Idiot. Playing with that idea he says A Round of Applause is the kindred spirit of Lust For Life.

Hooveriii derived the album title from the late-‘80s Roky Erickson song “Click Your Fingers Applauding the Play.” “That’s too much of a mouthful,” Hoover qualified. “My title, A Round of Applause, just came one day, and we were like, ‘Yo, that sounds like a Gentle Giant record.’”

Reflecting the mostly lighthearted and uplifting record, A Round of Applause closes cheekily — but not sarcastically — with the sound of people clapping. Hoover adds graciously: “We’ve been lucky so far. I don’t think we really have a, you know, ‘bad song.’ ” Maybe one will, someday. But Hoover doesn’t dwell on that; after all, his band has more records to make — and time is of the essence.