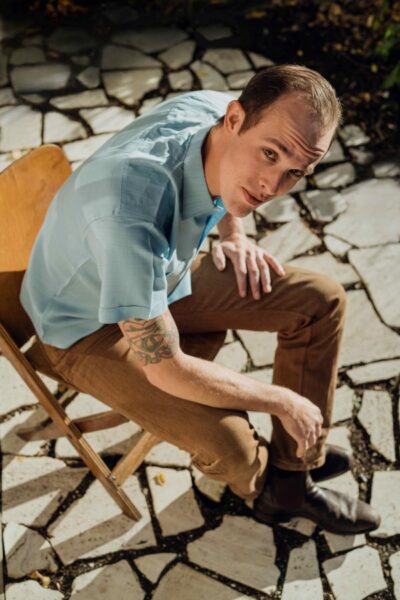 Musical missionary, tireless troubadour and producer Jack Klatt isn’t one to be easily categorized or relegated to a  narrow niche. he comes across as a young man with a wizened and worldly perspective, an artist who possesses a timeless sensibility of both place and purpose. Yet, his artistic integrity extends to more than simply his songs. It embodies both execution and intent.. the way he’s mastered his deft finger-picking technique and used that sturdy approach to bring his material an authenticity reminiscent of the most revered musicians and storytellers.

His upcoming album It Ain’t The Same (due September 27 on Yep Roc Records) reflects that reverential attitude, but adds a depth and devotion that ensures its contemporary credence. With Klatt himself singing, playing guitar and sitting in the producer’s chair, it boasts the talents of a skilled set of session players — John James Tourville (The Deslondes) on electric guitar and pedal steel, Casey McDonough (NRBQ) on bass skills, and Alex Hall (JD McPherson, The Cactus Blossoms, Robbie Fulks) on drums, percussion, keys and engineering.  It Ain’t The Same is, as its title suggests, something truly special.

Ironically, the title track is the only song that Klatt didn’t write.  It’s credited to guitar and steel player John James Tourville. The title itself aptly defines the overall vibe of the record, and the fact that it’s the only outside contribution provides a subtle way of alluding to the collaborative nature of the album.

Likewise, Klatt took a different approach to the production. “In the past, my records had been recorded live in two or three days, straight to tape, with little to no overdubbing,” Klatt explains. “I wanted to do something different this time…take some more care and explore all the possibilities the studio has to offer. I suppose that is part of where the title It Ain’t the Same came from. This record feels like a step forward for me, a departure from my earlier, country/blues based recordings. I learned and grew musically so much through the process. I can’t wait to get back in the studio and do it again.”