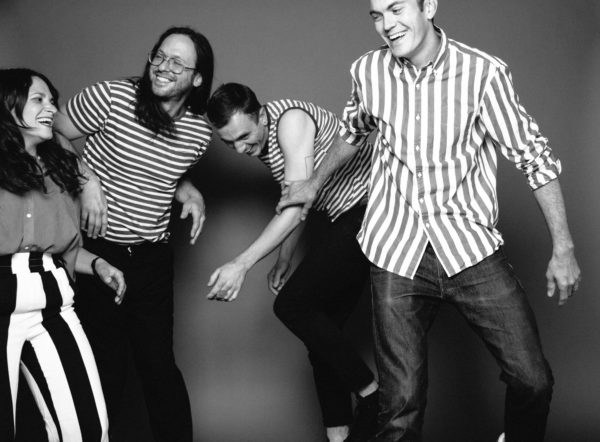 “This Minneapolis quartet could slot neatly in amongst a Mates of State record, a Pavement full-length and Vampire Weekend’s first album.” – Noisey

Little Fevers is an indie-pop group from Minneapolis fronted by songwriter Lucy Michell. Their new record, Strangers, is available now.

In 2013, Lucy Michell, Eamonn McLain, Ashley Boman, and Geoff Freeman were the remaining founding members of the folk-pop orchestra, Lucy Michelle & The Velvet Lapelles. After seven years of recording and touring, with families and careers blossoming, the Velvet Lapelles parked the touring van and disbanded.

Their friendship and love of creating music inspired them to try a new direction. So in 2014, they traded their acoustic instruments for electric guitars and synthesizers. Reflecting their new sound, they adopted a new name, Little Fevers, and soon were tracking new songs in both Brooklyn and Minneapolis. Their debut record, Field Trip, was released in 2015, blending their electric indie sound with new wave influences.

Lucy explained the band’s evolution, “When we were in our twenties, we had more money to go on the road and release records because we didn’t have as much life responsibility. Little Fevers has been our passion project.”

In 2019, following Koza’s departure, Little Fevers enlisted guitarist Paul Puleo and completed work on their second record, Strangers. The new record is a dreamier affair than we’ve heard from the group — continuing a journey of artistic exploration and camaraderie that the members of Little Fevers have pursued now for more than 13 years.