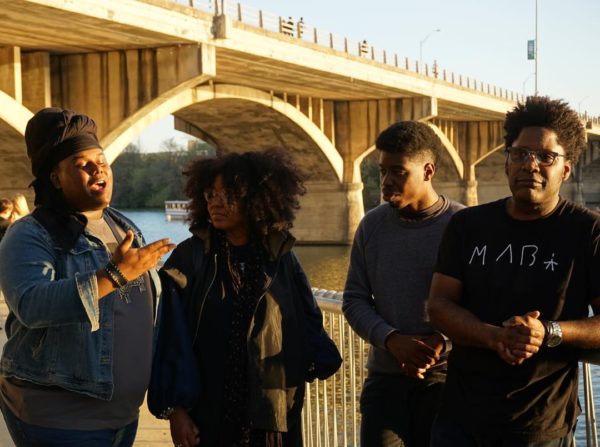 Mourning [A] BLKstar is a multi-generational, gender and genre non-conforming amalgam of Black Culture dedicated to servicing the stories and songs of the apocalyptic diaspora.

RA Washington was left bewildered after the murder of his close friend. He felt reflective and drifted into in a creative crisis. Disillusioned by the idea of making a living as an artist, he was unsure if his future as a poet and beat maker was sustainable. He knew that he needed a new spark –new voices around him– and he soon found it as he invited long time friends, LaToya Kent, and James Long to record over new beats, crafted in honor of his lost friend. It was not long before the group began to realize that they had something special. After bringing Jazz singer, Kyle Kidd into the mix, they began to record their first record, “Blk Musak,” which explores a conversation between iconic symbols and concepts that have historically sustained marginalized people– the heart of black music.
Mourning [A] BLKstar wants to communicate their vision and love for the community while collectively creating greater opportunities to create and share.