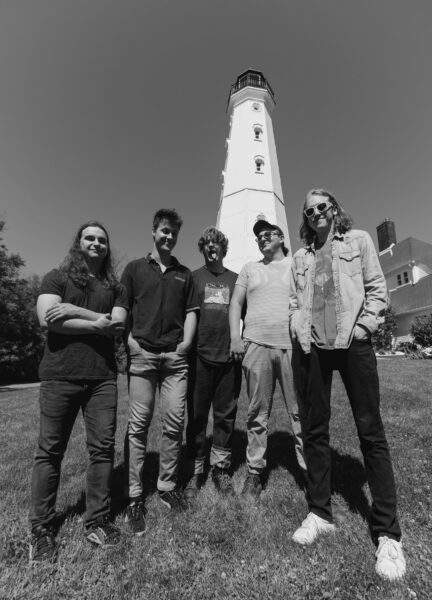 THE NILE CLUB is a group who writes and self records music for all people. Named after an abandoned pyramid-shaped nightclub on the backroads of Wisconsin, The Nile Club is: Sam Walters, Malachi Kaehne, Chai Devlin, Samwise Baker, and Jack Lusk. The band formed as a trio (Walters, Kaehne, Baker) in 2017, and began to combine their solo writing into cohesive music in a leaky basement. With multiple writers and frontmen, The Nile Club gives you something to blast on your speakers in times of both joy and sorrow. Subject matter spanning from tales of fantastical creatures to the wage gap to feelings of self-illusion, The Nile Club speaks for the losers. Recorded and mixed out of basements in Sun Prairie, WI, their debut LP “Motions” came out in October 2019. It was graciously received by their local communities, and they played multiple festivals and house shows in the beginning months. The group then moved to MKE, WI in early 2020, and as well as playing larger and louder shows in the city, they used the many dreary months of the pandemic writing and recording their follow-up album. This album is to be called “Wake Up With a Sense of Pride”, and it is coming to the world SOON in 2022