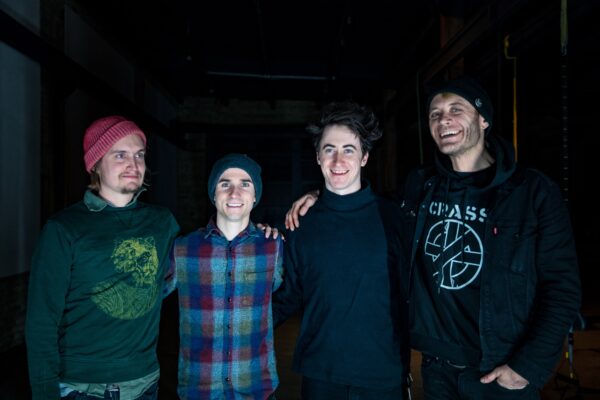 Self-described as a psychedelic chamber ensemble for the disobedient and melancholic youth, Milwaukee’s SOCIAL CATERPILLAR—a four-piece collective composed of vocalist and guitarist Kyle Smith, bassist Eli Smith, violinist and guitarist Eric Ash, and drummer Whisper Crystal—have been playing and recording a unique style of music that defies simple categorization together since 2016.  The band, which which features current and former members of Midwest DIY staples like Cairns, Swells, Gauss, Scowler, and Alta, have sought to traverse diverse sonic territories accented with an expansive instrumentation and a punk ethos that gives SOCIAL CATERPILLAR their inimitable sound.  Deeply personal lyrics with an ethic towards protest layered over acoustic and distorted guitars and a pounding rhythm section mixed with sprawling string and horn arrangements, SOCIAL CATERPILLAR embodies a method of experimentation that creates uniquely unparalleled and haunting soundscapes for their listeners.

SOCIAL CATERPILLAR’S newest full length, When You Woke Up To Dances of Light, sees the band again returning to Electrical Audio in order to create a record that at once continues the foundations laid on their debut LP while traversing new and expansive sonic territories that transgress the boundaries of their previous work without abandoning the core of their sound and approach to music.  With When You Woke Up To Dances of Light, SOCIAL CATERPILLAR find their place in an enigmatic intersection of a variety of styles wherein the creative aesthetic the band has cultivated skillfully navigates a distinct blend of poetic lyricism and complex arrangements accented with violin and horn sections in such a way that is uniquely their own.  Calm and carefully composed at times while chaotic and distorted with ambient and experimental elements at others, with their newest effort SOCIAL CATERPILLAR showcase their ability to continuously evolve into new territories and the results are as beautiful as they are hauntingly rememberable.