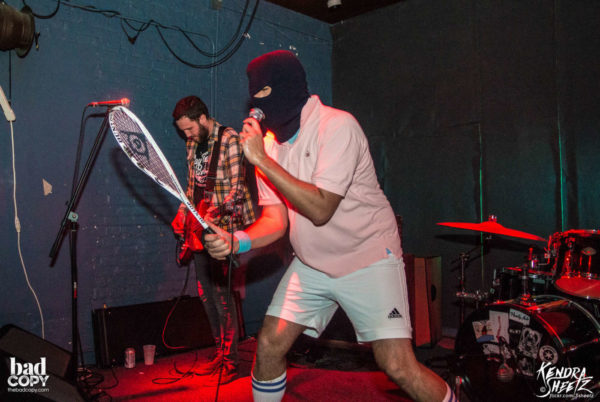 Chicago squash-punk outfit The Eradicator, is part fan fiction, part truth. It follows the titular character—The Eradicator, a combative, ski-mask-wearing squash player—as he tries to find his place in the world and the local squash club standings, backed by fist-pumping, Fucked Up-meets-Andrew W.K. anthemics. Live in concert, The Eradicator is in character, masked and driven solely by squash. But behind it all is vocalist and guitarist Andy Slania, a regular dude working in IT trying to find his place in the world, too.

Slania grew up on Kids In The Hall, which originated The Eradicator character: a weird, mischievous sportsfreak breaking into boardroom meetings to challenge “pusshead” businessmen to squash matches, swatting the air with his racket. It stuck with Slania, who understood The Eradicator as an outsider.