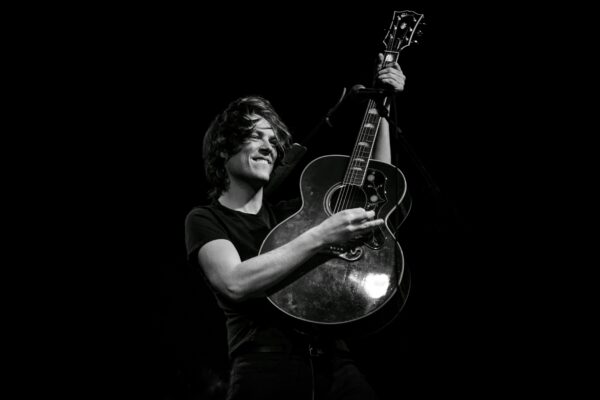 In 2019, Milwaukee’s Trapper Schoepp hit a songwriter’s jackpot: a co-write with Bob Dylan. And the circumstances were wildy serendipitous. On the day Dylan entered Columbia Studios in 1961 to begin recording his first studio album, he wrote a song about Wisconsin. The lyric sheet sat unseen with a former roommate, and was later unearthed and put up for auction at $30,000. Schoepp saw the story and seized the opportunity to set music to words. After Schoepp’s effort, he was granted Dylan’s approval to jointly publish the song. This 57-year-collaboration–“On, Wisconsin”–led to features in Rolling Stone and Billboard, an album called Primetime Illusion produced by Wilco’s Patrick Sansone, and nearly a hundred international tour dates. But other ventures in the singer-songwriter’s life weren’t as fulfilling.

Schoepp spent the summer prior to the release of Primetime Illusion at the Hotel Astor, a historic 1920s hotel he describes as having “the air of a haunting Stephen King novel.” Indulging in the spookiness of his transient lodgings, Schoepp went on a ghost tour of Milwaukee, and as the specters saw fit, the tour ended back at the very hotel where he was staying. The guide shared the story of a 1935 fire that claimed the lives of a nurse and her patient, a deaf man who did not wake to the nurse’s pounding at his door. With creative liberties, Schoepp reimagined their story into “Hotel Astor.”

Schoepp explores themes of ghosts and rebirth, springtime, and renewal on his album, May Day – out 5/21/21 on Grand Phony Records. “May Day is an ancient holiday that celebrates the arrival of springtime, the natural world, and also workers’ rights. It’s also my birthday,” Schoepp says with a laugh. “After this trying winter, we found solace in making an album for the spring.”

May Day, the halfway point between the spring equinox and the summer solstice, has historically been observed with dancing and singing around a maypole. Schoepp’s album cover features a Roaring Twenties era photo of women dancing around a maypole alongside the Washington Monument, which was found in a Library of Congress archive by his brother and bassist/singer, Tanner Schoepp, and adapted into album art by designer, Daniel Murphy (Bon Iver, The War On Drugs).

“I was born on the first day, fifth month called May/I’m here today to say I need you in the worst way,” Schoepp sings in the opening title track. Against a driving Springsteen-esque beat, Schoepp tells a transcontinental tale inspired by an untenable living situation he faced weeks before departing on a European tour. “I woke up with a frantic sense of urgency the morning the piano movers came. I finished ‘May Day’ as they were pulling up, thinking I owed it to the piano to write one more song on it.”

Weeks later on tour in Paris, Schoepp penned “Paris Syndrome,” an acoustic ballad inspired by a rare but real psychiatric condition that afflicts tourists when the City of Lights does not meet their expectations. “I thought the condition was partly tragic, partly humorous – which is something I gravitate toward in my songs,” Schoepp said.

The music of May Day is both a celebration of more hopeful times and a reflection of a darker past, often using the natural world as a motif. As Schoepp sings in the lost-at-sea, acoustic ballad, “Yellow Moon”: “Amidst a sea of emotion/A life led in perpetual motion/After many months lost at sea/I learned loneliness is a part of being free.” The minor key piano rocker “River Called Disaster” expresses the feeling of being broken down by the compulsion for more – its music video sees Schoepp lighting a piano on fire.

Echoes of bluesmen like Screamin’ Jay Hawkins are heard in the slide-guitar-driven “Little Drop of Medicine” – which is set in the Garden of Eden. “Go to the garden, that’s where it starts/With body and blood, flesh and heart,” Schoepp sings. “I was alone, you were what I was missing/Then that serpent spoke, and baby we listened.”

The 10-track album was recorded near Milwaukee, Wisconsin, amidst the pandemic and citywide protests for racial equity. “In between vocal takes, I stepped outside in my surgical mask and saw a fleet of military Humvees driving by the studio to a protest. Helicopters overhead. Surreal and scary for the people taking to the streets to stand up against police brutality.”

The album was produced by Schoepp and his longtime friend, Ian Olvera, whom he bonded with as a teen over AOL Instant Messenger after trading bootlegs on a Bob Dylan message board. The two ended up meeting in person while front row at a concert, not recognizing one another from their online kinship until after the concert. They remained musical comrades and Olvera engineered Schoepp’s 2019 album, Primetime Illusion. Olvera took on the multiple roles of producer, engineer, and multi-instrumentalist on May Day as part of an effort to keep the sessions socially isolated. “He was a one-man machine and we’re certainly indebted to him for the warm tone of May Day,” Schoepp said. “There were some experimental turns in songs like ‘Something About You’ and ‘I Am a Rider’ that Ian really sculpted.”

On May Day, Schoepp and band defy the limitations of standard-issue Americana by hopping genres and experimenting with drum machines, modular synths, and droning guitars. The record finds Schoepp handling vocals, acoustic guitar, and, for the first time on an album, piano.  He’s accompanied by his touring band: his brother and musical-foil, Tanner Schoepp (electric bass and vocal harmonies), Matt Smith (slide and electric guitar), and Jacob Bicknase (drums). “In ordinary times, we would’ve gone to the basement to get the arrangements right but we worked remotely, slowly exchanging musical ideas via modest home studio setups,” Schoepp said of the atypical pre-production process.

Following the cancellation of a lengthy European tour, Schoepp and his brother weathered the early stages of lockdown by working on May Day and doing live streams for socially conscious organizations like Guitars 4 Vets, Harmony 4 Hope, and RAINN.

He also began selling out of a t-shirt he made years back that simply says “This Isn’t Fun Anymore.” Schoepp overheard a boy cry out the phrase on an amusement park ride called The Scat, which inspired the sentiment for the lyric, and later the shirt. The song “The Scat” was later used as the theme song for The Onion’s ‘A Very Fatal Murder’ podcast and in a trailer for HBO’s ‘Perry Mason’ series.

Having spent the last half-decade “getting home just in time to leave again,” playing countless dates, and sharing stages with such like-minded Americana mainstays as The Wallflowers, The Jayhawks, Frank Turner, and Old 97’s, Schoepp hopes to take to the road again when it’s safe. Until then, Schoepp will be promoting May Day through drive-in concerts, live streaming and small, socially distanced events.

For all the darkness surrounding May Day, Schoepp hopes it will be a respite for listeners he was unable to reach on the road. “The pandemic devastated the live music industry but the need to be transported through song remained. I hope May Day offers that sort of escape.”