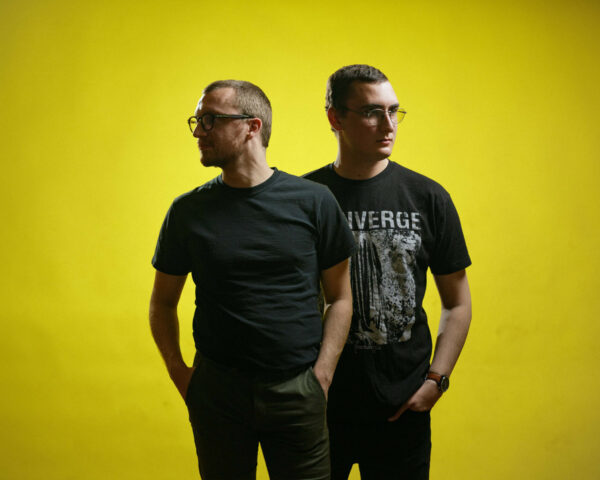 Quitter is a record about quitting.

Modeled after Tunic’s live attack, an ugly and unhinged blast of catharsis that can comfortably live beside the tuneful noise of Metz, the spazzy-goth freakouts of Daughters and the riffy melodicism of Pile, the sophomore release from the acrobatic post-hardcore crew is a record about discomfort created in comfort, relatively anyway. Built over the course of seven days with producer Jace Lasek, Tunic was primed and ready by the time core members guitarist/vocalist David Schellenberg and drummer Daniel Unger set foot into Private Ear Studios in January 2020: “It was a relaxed environment because we had done our homework,” recalls Schellenberg. “That made for a much better record because we knew who we were and what we wanted to sound like.”

Tackling Schellenberg’s newfound sobriety and the recent exit of co-founding member Rory Ellis, in addition to themes of loss, survival, and redemption, Quitter is about perseverance and reshaping existence for the better. “I co-own and book a bar for a living,” says Schellenberg. “So it’s a weird position to be personally avoiding alcohol while surrounded by it and offered it constantly.” That initial struggle of freeing yourself from the bonds of a depressant, its emotional connections and learning new ways to cope outside of substances form the crux of the ideas behind the LP — well, that and a boatload of riffs inspired by everyone from Botch to The Jesus Lizard.

Formed in 2012, Winnipeg’s Tunic was borne of spite — formed after being told Schellenberg “wasn’t good enough” for another band. Abandoning someone else’s dreams for his own, Tunic sought out a sound inspired by the melodic approaches of Quicksand and Superchunk, venom and heartache in Converge and calculated instrumental prowess behind Cult Leader. Releasing their debut 7” in 2015, Tunic has since charged across the globe relentlessly, zigging and zagging as part of more than a dozen jaunts in North America and Europe, as well as tagging shows with a varied lot that includes names like Ken Mode, Single Mothers and even Hank Wood and the Hammerheads. Tunic’s bloodlust for the road has caused some turnover in membership, not to mention bouts with tinnitus, bangovers and exhaustion. Yet in between all of that touring, Tunic crafted and released their debut LP Complexion for release in 2019. The album was followed by another massive 11 weeks of dates to support it, naturally.

With some time for reflection and even a brief period of -gulp- actually slowing down, Tunic has returned with their most coherent set of songs yet. Quitter is the middle ground between intelligence and blunt-force trauma, channelling rage into a set of songs hellbent on redemption through self-examination. On “Reward of Nothing,” Schellenberg belts out his thoughts emphatically:

“It’s about the hopelessness of the entire situation–” explains Schellenberg of the lyrics, delivered with a jaw-clenching fury. “It’s about having a dependency on alcohol and watching everybody age out of your own band.” Yet regardless of the bleakness of the lyrical content, the quality of the songwriting and original riffs shine through, making Quitter something that won’t leave your musical headspace.