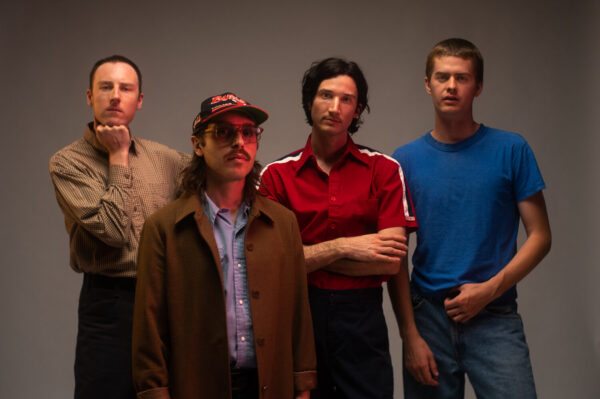 Restlessness is the first step towards pleasure. We make comfort out of discomfort, pleasure out of pain. That journey isn’t always a straight line, but at least we’re going somewhere real. “I had to move, Lord I couldn’t be still” is the unsettled way that Video Age’s new album and title track, Pleasure Line, begins. But as the song unfolds, it uplifts us into a romantic space of possibility and love.

Just as “love” is both a noun and a verb, Pleasure Line is both a road to be traveled and the act of crossing that road. Singer and multi-instrumentalist Ross Farbe says, “Once you cross that threshold and become vulnerable in love, there’s a whole new challenge. There’s a reason that song comes first on the album, because the rest of the songs exist in that place.” These catchy, memorable songs radiate big “glass half-full” energy.

Video Age’s third album, due on August 7, 2020, from Winspear, pairs neon-bright 80s pop melodies with a vast range of influences (including Janet Jackson, David Bowie, and Paul McCartney) to create an optimistic sound all their own. The influences vary song to song, but they’re all tinted with the same rosy hue. Farbe says, “I’m often trying to create a more idealized version of the world I’m in.”