Monika Estrella Negra is a queer, Black punk/goth hybrid of mystery.  A filmmaker.  A writer, a nomadic priestess, spiritual gangster and all around rabblerouser.  We welcome Monika to share two of her films followed by a written Q+A which discusses her forthcoming short film, horror film favorites and so much more.
•••••••••••••••••••••••••••••••••

NOTE: There is a moment in the film where it seems as if the sound is mismatched. This is done intentionally.

As part of Monika Estrella Negra’s ‘Vengeance Anthology’, look into the transgenerational horrors of infertility/fertility, anti-blackness, and sacrifice.

“Violence affects Black women on multiple levels. This photo and short film series explore the sadistic assault on our bodies and our ancestors, and the trauma passed on through the generations. The words accompanying these images are meant to invoke the stories present in our DNA and through our own lives. This was a significant process of working through transgenerational distress, and the toll it still takes upon us.”
— Monika Estrella Negra

I was hoping you could start by telling us a little bit about yourself?

Sure! I am a writer, filmmaker, and activist hailing from Milwaukee/Chicago and have now set up anchor in Philadelphia. I used to organize punk shows and then moved on to film once I burned out. I now write full time and am working on completing my fourth film, ‘Bitten, a Tragedy’.

How did you get into filmmaking?

After I finished organizing with Black and Brown Punk Show, I decided to entertain my love for cinema. I have always held a fascination with film but had never considered making one myself. I didn’t have a solid plan as to what I wanted to create but I did know that I wanted to dabble in horror. Horror is a sort of lawless genre where you can explore multiple subgenres in order to create a unique, visually stimulating dream. I also became acutely aware that Black women as protagonists in horror were suspiciously missing from mainstream cinema outlets. So, I wrote FLESH as a means of exploring what a Black female protagonist looks like from a radical perspective. From then on there I became immersed in the industry and found a nice place to set up shop for QTIBIPOC that were also interested in horror and science fiction.

A lot of your work seems to be a reimaging of the world, or maybe fantasy is a better word for it, which I really appreciate. These ideas seem rooted in the way you make your films. Can you talk about how your collective, Audre’s Revenge Film, and what inspired you to create it?

I think it is only natural for oppressed peoples to attach themselves to fantasies as our realities are often harsh. I tend to cope with the traumatic elements of my life by reimagining them in extremely exaggerated or horrific ways – on my terms. You know the expression, “we laugh in order to keep from crying?” It kind of works like that. Anyway, I had begun to revisit Audre Lorde’s “Sister Outsider” where she discusses systematic oppression and violence against Black women. Black women are often subjected to a certain degree of dehumanization and in that dehumanization, we are consistently victimized by a society that deems us expendable. Horror, in my mind, has always played on the irrational fear of its viewers. I wanted to redefine what constitutes a rational and very real fear based on a person’s identity. In that respect, I also wanted to pay homage to the horror films that I grew up with while involving my friends. I first dabbled with the idea of a collective in the same vein as the Black and Brown Collective, with an emphasis on highlighting Black folks and people of color LGBTQA creatives who work within science fiction, fantasy, and horror. This was nothing new as Black subgenre films and film communities have existed in the margins and queer fear had already been capitalized upon by predominately white LGBTQA, but there weren’t *many* that explored the Black queer eye. Thus I created Audre’s Revenge with beginning member Maya Lori and co-founder Mariam Bastani.  I then wrote FLESH as a means of breaking up with my old life as an organizer in Chicago and moved to Philly after I finished filming it.

What sort of sci-fi and horror inspires you? Why do you think these genres are important?

Horror and science fiction mash-ups have always been my fav. They are like the PB and J of subgenres films. It introduces the mashing of ideas that linger on the margins of irrationality and fantasy. It’s the literal representation of what is rooted in reality and created in fiction.

A lot of my characters are based on the people that I have met over the years, in different places. I am a bit nomadic and end up in bizarre scenarios, so there is never a shortage of characters. I tend to have the best in-depth convos with other Black women and I typically pull our shared experiences for content within my films.

Can you talk about your role on the screen?

In my upcoming fourth film, ‘Bitten, A Tragedy’ I play the lead character, Lydia. I don’t think of myself as an actress but I felt as if the movie was a story about myself and thought I could pull it off. I think my ultimate role on the screen is to share my perspective with those who don’t know what it is like to live on the fringe. I know that many mainstream platforms live off of Black creative blood but I think it is important to retain our autonomy so that our stories and messages are not polluted or exploited. I think it is our job to keep the underground cinema fresh, alive, and subversive and I am honored to partake in the mission.

On top of making films, you also write about films for various platforms, what sort of things do you like to write about/where can we find you?

I am a staff writer for Syfy Fangrrls (as part of SYFY WIRE) and I have freelanced for Grim Magazine, Rue Morgue, Bella Books, and Fangoria. You can access most of these works from my social media platforms, both on Instagram @audres.revenge.film and @monikaestrellanegra. You can also keep up to date via Twitter @negramonika1. My WordPress will be available on January 1st.

What advice would you give to other filmmakers interested in working in these genres or starting out as a filmmaker?

Not to overthink things. Filmmaking is daunting and can take a lot of time and resources. When in doubt, hit up your friends and make it into a community project. Always make sure to eat before a shoot (hanger is real). Believe in your project even if you hit roadblocks along the way.

What are you and the collective working on now?

We are working on getting ‘Bitten, a Tragedy’ finished before the end of the year and we have a couple of scripts that we are priming to produce after this pandemic ends.

How can we stay connected with you and your projects?

Lastly, any recommendations for some of your favorite horror shows/films that others can check out?

Slumber Party Massacre 1 +2, Hair Wolf, Vampires vs the Bronx, The Invisible Man, and Queen of the Damned. Seriously, revisit that last one. It’s not a nu-metal conspiracy, I promise! 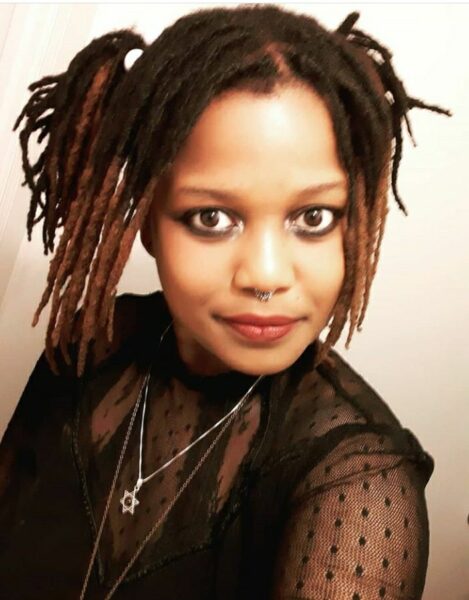 Monika Estrella Negra is a queer, Black punk/goth hybrid of mystery. Her first short titled "Flesh" is about a Black femme serial killer navigating the Chicago DIY punk scene (of which was included in the 'Horror Noire' syllabus). She has directed three additional shorts, 'They Will Know You By Your Fruit', 'Succubus', and the in production 'Bitten, A Tragedy'. A writer, a nomadic priestess, spiritual gangster and all around rabblerouser – Monika has written essays for Black Girl Nerds, Grimm Magazine, Black Girls Create, Black Youth Project, Rue Morgue, Fangoria and is the author of a zine series (Tales From My Crypt). In addition, she is the creator of Audre's Revenge Film and Black and Brown Punk Show Chicago, a GRRL Haus Cinema Resident Filmmaker (2019) and a staff writer for Syfy Fangrrls. Hailing from the Midwest, she now resides in Philadelphia.