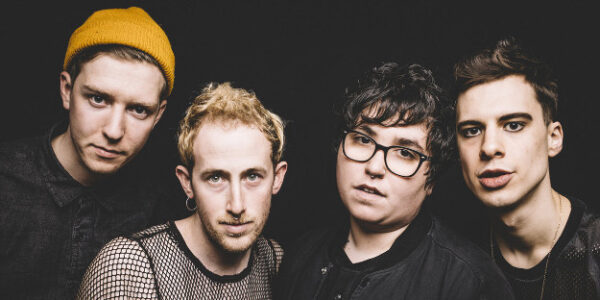 Dreams and Queer Feeling. A slogan, a mission statement; maybe a bit of “don’t say we didn’t warn you”—spray-painted in white on black canvas and hung behind the band during a memorable series of 2018 shows, those four words distill the thrill of an Alien Boy set with a directness that perfectly mirrors their fearlessly sentimental guitar music. Though Sonia Weber is often singing about the insecurities and confusion of love and heartbreak, Alien Boy songs overflow with the confidence of a band that knows exactly what they’re going for, and more importantly, know that they’re nailing it.

Alien Boy is guitarist and songwriter Sonia Weber, drummer Derek McNeil, and a rotating cast of Portland, Oregon scene stalwarts. As her band’s Wipers-inspired name might imply, Weber is a PDX lifer, and anyone who’s spent time in the last decade’s DIY circuit will recognize something undeniably West Coast in Alien Boy’s sound: a sharpened, focused take on the heavy guitar pop of the 1980’s, chorus pedals and punishing drums the canvas for bold strokes of recollection and yearning.

The band coalesced in 2015 around the recording of that year’s Never Getting Over It, an 8-song pop sprint that boasts an brash debut charm and heartbroken fervor—not to mention an overnight, practice space recording session origin story—that’s shamelessly the stuff of underground rock legend. In fact, Alien Boy is the rare band to have digested decades of guitar music mythos without regurgitating cliche at all. Weber may have called a song “Only Posers Fall In Love,” but many of her most impactful lyrics come packaged as references that feel deeply genuine rather than forced. “Your my Robert, I’m your Patti.” “You said you wanna be adored, but no one does it right.” At a time when many of her peers seem embarrassed by the Strats slung over their shoulders, Weber busies herself writing six-string anthems that new generations of digital crate-diggers will be obsessing over decades from now.

2016’s seven-inch Stay Alive built on Alien Boy’s promise, infusing pop hooks with post-punk bite and goth ennui, and offering one of the decade’s best wordless choruses on live favorite “So Three Years Ago.” Two years of captivating audiences in basements and DIY spaces alike culminated in the 2018 release of Sleeping Lessons, a breakout LP that perfectly pulled off the counterintuitive trick of polishing Weber’s pop songwriting credentials by foregrounding the band’s shoegaze bonafides. It’s hard to overstate the sheer power of lead-off track “Somewhere Without Me,” the sort of hit that seasoned pop mercenaries spend decades chasing. This is a song that manifests an audience by sheer force of will. It’s enormous, almost overpowering; the guitars swallow you whole. But it’s also so, so small: “You wanna be/ Somewhere without me,” echoes the chorus, relishing in the crushing feeling of being rendered nearly microscopic under the weight of rejection.

That embrace of both the miniscule and the massive perhaps best describes the emotional resonance that lodges Alien Boy songs in your brian for weeks on end. In advance of the record, a glowing profile in local alt rag The Portland Mercury noted how “Alien Boy fosters a radical intimacy with their audience.” No one who’s seen the band live could disagree, and a year and a half on from Sleeping Lessons, Alien Boy seem poised to stretch that intimacy to universal proportions. (Nathan Tucker)