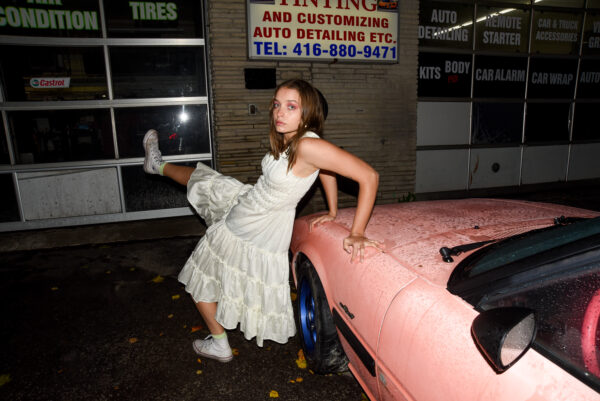 PACKS make music that’s like leafing through a diary entry of a time without visible movement, a subtle beauty that appears only when paying close attention.  Initially a solo songwriting project of Link’s, whose keen lyricisms are a standout among her peers, the band is also comprised of Shane Hooper (drums), Noah O’Neil (bass), and Dexter Nash (lead guitar). Anchored by Link’s voice, which brings such an easy charm to her songs that it’s easy to miss her keen ear for acrobatic vocal lines, together they turn Link’s melodically adventurous and introspective songs into the purest and brightest kind of indie rock. The band’s debut is a collection of songs that marry the loose but incisive jangle of early Pavement with the barbed sweetness of Sebadoh and the wide-eyed wonder of the first Shins LP.

Take the Cake is an enchanting record with a transportive quality. The songs communicate Link’s perspective acutely, with details that stand out in their specificity yet feel naturally at ease with melody and a loose charm that make the album feel timeless, like one that could have emerged from any of a number of golden ages of indie rock.  PACKS’ songs have a way of creeping up on you, and showing new depth with each listen. Be it a subtle harmony, a zig-zagging melodic turn, or Link’s lyrics, which wring a commandeering poetry out of every-day building-blocks as she navigates the growing pains that linger beyond adolescence.  Call it world-building on a miniature scale: a more apt way to describe it would be a careful collaging, making sense of catastrophic loss and tiny signposts that point to something greater than the sum of its parts.

Now based between Toronto and Montreal, the band is working towards their anticipated second record and are playing SXSW with more new material on the way.