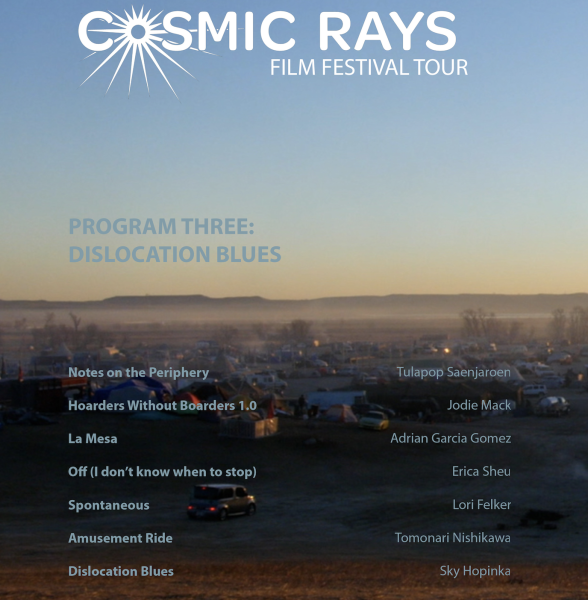 A selection of films that explore the instability of place and place-making from various historical, formal, and personal perspectives. For each of these films, the here and now is always elsewhere, another history, another time and place. The program features work that adopts original and diverse approaches to its subjects, subverting the traditions of documentary, ethnography, as well as animation.

Notes from the Periphery
Tulapop Saenjaroen RT: 13:31
Mainly shot in the peripheral areas of the ever-expanding Laem Chabang port in Chon Buri, Thailand, An interrogation into the notion of territoriality, globalized networks, and ownership through fragmented relations of the affected sites and communities nearby. Shipping containers that become a policing tool, and the life cycle of a barnacle.

Hoarders Without Boarders 1.0
Jodie Mack RT: 5:44
Featuring crystallized magic markers and the kidney stone of a horse, the generously-curated mineral collection of Mary Johnson comes to life in a manual labor of love for the process of archival procedure.

La Mesa
Adrian Garcia Gomez RT: 9:45
Masculinity and queer desire in rural Mexico. La Mesa explores the intersections of memory, identity and queer desire.  It recreates fragmented and romanticized stories of a childhood in rural Mexico as told by the filmmaker’s father. These disjointed vignettes are interwoven with queered reenactments of scenes from popular culture. The filmmaker casts himself in the old Mexican films and American Westerns he grew up watching with his family in California.  He appears as the romantic lead opposite the male actors, including Pedro Infante, Mexican national hero and the filmmaker’s childhood crush.  The animations are laid over footage of the old family home in Mexico which now sits alone, slowly being consumed by the surrounding countryside.  By centering queer desire in his family’s history, the filmmaker validates his childhood experiences while challenging popular representations of masculinity as well as traditional notions of power and vulnerability.

Off (I don’t know when to stop)Erica Sheu RT: 2:45
Day after day, bars of sunset pass the kitchen. Lamps carry on when the sky gets dark. The frame finds its balance. Life in work and work in life.

Spontaneous
Lori Felker RT: 14:00
You never know when someone is miscarrying; it could be happening right next to you.

Amusement Ride
Tomonari Nishikawa RT: 6:00
Shot with a telephoto lens from inside a cabin of Cosmo Clock 21, a Ferris wheel at an amusement park in Yokohama, Japan. The distorted image shows the structure of the Ferris wheel, focusing on the intermittent vertical movement, which resembles the movement of a film at the gate of a film projector or camera.

Dislocation Blues
Sky Hopinka RT: 17:00
An incomplete and imperfect portrait of reflections from Standing Rock. Cleo Keahna recounts his experiences entering, being at, and leaving the camp and the difficulties and the reluctance in looking back with a clear and critical eye. Terry Running Wild describes what his camp is like, and what he hopes it will become.