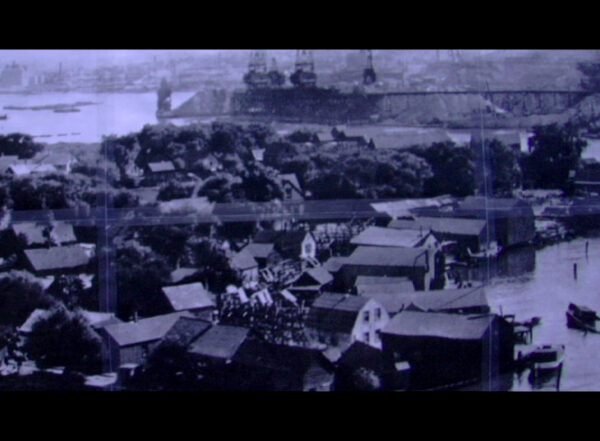 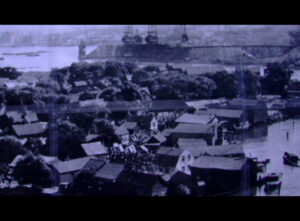 “The First Shot is Silent is about the commemoration of a once-thriving migrant fishing village in Milwaukee, now bulldozed into an industrial corridor. As with all progress, many experience its opposite: reversal into disappearance. The memorial attempts to preserve the idea and memory of the kaszubes, and is a physical marker that conjures the realness of geography and the actual bodies that once animated it. It feels like a weak apology to me.”

This video is no longer available to the public.

Steve Wetzel is an artist and video maker from Minnesota, USA, and is an Associate Professor in the film department at the University of Wisconsin-Milwaukee. Over the past decade Wetzel has produced many works of experimental non-fiction and anthromentary video, and has shown nationally and internationally. Much of Wetzel’s work focuses on social construction and the everyday inscription of the human symbolic. These themes can also be found in two small volumes of Wetzel’s writings, Occasional Performances and Wayward Writings (2010), and [PAUSE] (2014, Green Gallery Press), described variously by his editor as “an urgent and generous exegesis,” and “a contemporary mix of aesthetic-, personal-, and moral imminence.”

Natasha Woods, filmmaker and coordinator at Cactus Club has a conversation with Steve Wetzel about The First Shot is Silent (Kazsubes Park):

NW: When/how were you first introduced to Kazsubes Park?

SW: Many moons ago, when I was a graduate student in the film department, I worked in the television studio in the sub-basement of Mellencamp at UW-Milwaukee, which I think is or was the nursing building? I should know this. Anyway. It was BELOW the basement, double-0 on the elevator keys, or maybe double-B: BB. Yes, BB. You’d descend and there’s no light and there are these interesting tech guys, all in their 40s, 50s and 60s, fixing speakers and tinkering with coaxial cables and rewinding 1” video tape and reviewing the day’s video recordings and preparing the studio for a shoot and gathering gear to go record Science Bag. Great place. Unique. It’s all gone now by the way. So this one employee, Dave—I can’t remember how to spell his name but I can hear it: Miss-SHEFF-skee—Dave Miss-SHEFF-skee, this one employee, an engineer I believe, and he had a great big bushy mustache and worn-out blue jeans and his back was a little round like he played a ton of guitar and his hair was sort of long and straight and tapered, Dave sat me down one day and said that I needed to go see Kaszube’s Park. I remember him saying that he was a descendant, but I could be mistaken. Hi, Dave! And thanks for the great tip. I tell everyone, or many people, that they need to go see Kaszube’s Park. Pack a lunch and find it.

NW: How do you get there?

SW: Pack a lunch and find it.

NW: How did you come to make a film about the annual picnic?

SW: Once I saw the site I knew I wanted to make a work about it. And then someone, somewhere, maybe Dave, mentioned that there was an annual picnic. Somehow, somewhere I saw a flier for this picnic. I phoned the contact on the flier, Jim Kupferschmidt, whose grandparents lived on the island. Jim died not that long ago. He was a real advocate of Kaszube history and, from my brief interactions with him, a really nice guy. My sense is that he was one of the organizers of the picnic at that time. He invited me for the day and I recorded for a good 6 hours or so.

NW: What is your relationship with the folks on screen?

SW: I am a total outsider. We share an interest in the sanctity of the place, its specialness, its importance as a marker of a whole host of converging interests and struggles. But I am just an outsider, a tourist with a pretty developed aesthetic sensibility.

NW: What was the most striking thing you learned about the park/land/people?

SW: the time what hit me really hard was the extent to which we all live atop human history. This particular site, and many others as well, is marked and noted as such, but the fact is that everywhere we go, every place we are, we stand atop human history, lived and traversed by others not me, or by all manner of life over and above me. I hadn’t given that idea much thought prior to experiencing Kaszube’s Park—made me think about the miserable suburb I grew up in and how OF COURSE it wasn’t always a miserable suburb.

NW: What is your favorite park in Milwaukee/which one do you visit most often?

SW: Kaszube’s Park, hands down. Well you know Milwaukee has an extraordinary park system due mainly to the many socialists in city hall back in the day. These folks valued communal, public spaces and urban sustainability and they built the GREAT park system we enjoy today. We have to continue to press our current leadership to support these sites, which could mean higher taxes or a reshuffling of priorities. That’s how it goes. All of the initiatives to privatize these spaces are so dangerous. Year after year we find ourselves in more and more regulated, private space, that has no relationship whatsoever to the public good or commonwealth. The county parks are public places that need to remain as such: PUBLIC, open, shared, communal, OURS.

NW: What are you working on now?

SW: Jes, my partner and wife, just found kittens in our garage so we’re trying to figure out how to get them out of her car’s wheel well and into safer hands. We might try to foster them? I don’t know. She has some ideas. I follow her lead on all things cat-related. As far as creative work, I am in limbo as I just took on the position of Chair in UWM’s film department (FVANG). I love the department as it is a vital creative center in this city; as such most of my time has been dedicated to helping navigate the many, many challenges facing the department and the university during this difficult time. Again, like the parks, it’s a public institution that requires public support: taxes. We have to, as a state, recommit ourselves to the public good. We can’t just keep cutting the budgets of our public institutions. It’s a terrible plan, to privatize further and further. Politicians need to make the case for greater taxation, and the public needs to come together—in unity—for the sake of a stronger Wisconsin. Extracting money out of our public institutions, educational and otherwise, weakens our culture in every way.

For a collaborative spreadsheet on Milwaukee area parks, info, and fun facts that created by a fellow park lover,  check out this link feel free to add as you explore and learn.

Donate or get involved with Milwaukee County Parks.