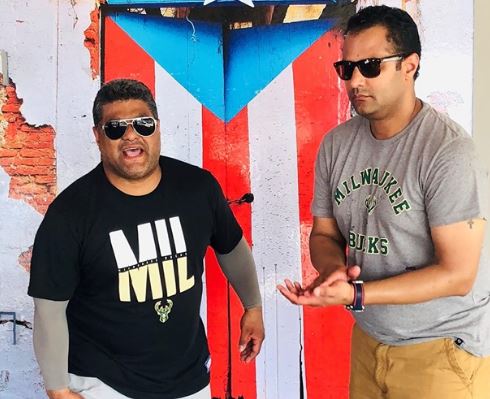 The mission of Hermanitos Ayala is simple, to bring the audience a piece of classical Puerto Rican culture through the interpretation of salsa music. It is a nine-piece salsa band that pays homage to the great Puerto Rican singers and artists of the late 1970’s – the golden age of salsa music.

Hermanitos Ayala (The Ayala brothers), consists of two brothers born and raised in Caguas Puerto Rico that have for the past 20+ years called Milwaukee home. It would be Puerto Rico that would plant the seed for the love and admiration of classical salsa music for years to come. Moreover, both brothers would develop a calling for percussion, leading to a path where congas and timbales would become their signature instruments. As teenagers – through Tony Ayala’s assertiveness - they formed their first salsa band, called
“Raphy Castro Y Su Orquesta”. Through evolution that later became “Salsa Syndicate” and would further develop their presence in the ever evolving Milwaukee music scene. Tony would later leave the salsa scene for a few years where he became entrenched in the
American music scene as a percussionist for “Sister Moon” and later the “Love Monkeys”, both successful established local bands. However, it wouldn’t be long before the pull of cultural
roots proved too strong and Tony, Wichy and partner Robert Figueroa decided to form their own band. The idea was to finally have a musical concept that created original salsa music and
through that exploration “Nabori” was born. Over the next 15 years, Nabori would record two original albums, tour extensively throughout the Midwest; culminating with a 2016 performance in their homeland of Puerto Rico. Nabori also afforded them the opportunity to play major venues such as, Summerfest, Jazz in the Park, Live at Lakefront, Kettle Moraine Jazz Festival, State Fair, Navy Pier in Chicago, Chicago Summer Dance Series, Chicago Cultural Center, Madison Dance Dances, to name a few. After 15 years Nabori would finally call its last performance on July 10th 2019.

However, the brothers have recently decided to go back to the roots of classical Puerto Rican salsa and form an exclusively local band that payed tribute to all the great Puerto Rican singers of the past. Of this conceptualization “Hermanitos Ayala” was born. Consisting of nine musicians – piano, bass, congas, bongos, timbales, lead singer and a three-piece brass section –Hermanitos will pay tribute to such artists as Ismael Rivera, Tommy Olivencia, Ismael Miranda,
Ray Barretto, Hector Lavoe and Celia Cruz among others.