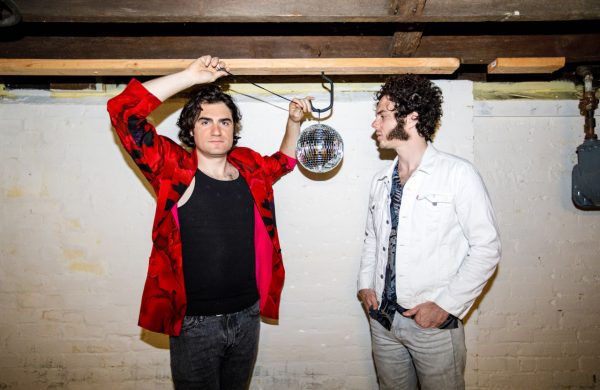 French Horn Rebellion is comprised of brothers Robert and David Perlick-Molinari. Hailing from the great state of Wisconsin, the now Brooklyn-based duo formed in 2007 after a lifetime of making music together. Robert had been playing French horn in the Chicago Civic Orchestra, when he decided to pursue his true passion of making music people can dance to. After informing his conductor that Mahler isn't fun anymore, Robert got his bassoon-toting older brother, David, to join him on this endeavor of self-emancipation.

As French Horn Rebellion’s resident pied piper, Robert concedes this bit of affable insight, "I play French horn really, really loud. That's the number one thing. We're running around and ripping off Jimi Hendrix solos on French horn. It's the equivalent of a pizza party in band class with Teddy Riley on the jukebox."

With this attitude, the band has gained a worldwide following of like-minded, rebellious band geeks. French Horn Rebellion has performed on 5 continents, in search of the best parties and collaborators. The group has been fortunate enough to work, play, perform and collaborate with some of the best and most influential artists around, such as Beyoncé, Of Montreal, Cut Copy, Yelle, Hot Chip, St. Lucia, The Drums, Two Door Cinema Club, SebastiAn, Autograf, and OMD. French Horn Rebellion has also had enjoyed getting their feet wet in other artistic industries world, with performances at fashion weeks in New York (Lincoln Center), Paris (The Louvre, Jean Charles de Castelbajac), and Berlin (Pull & Bear).

Since its inception, French Horn Rebellion has been an independent project, and the brothers now also co-own their very own label and studio in Williamsburg, Brooklyn - YouTooCanWoo. The studio has been responsible for producing musical artists such as MGMT and The Knocks, while also creating the audio identities for companies like Spotify, MTV, and LOGO.